I drove from Djupavik to Homlavik to Reykjavik that afternoon.

Djupavik is a very special place, owned by two very special people and their Border Collie: Eva, A’si and Freya (who diligently keeps track of all individuals, especially A’si) and run by an amazing and caring group of individuals.

Djúpavík is much more than a guesthouse and museum.  It is a place to contemplate the heart and soul of an awesomely beautiful and tranquil place on our planet, to hike and hear your inner voice, and to remember the simple joys of life.  Returning to the guesthouse for a meal, some rest or to cruise the Internet with your newfound family and friends is very much a part of this too. 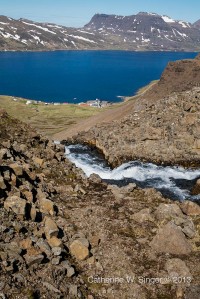 Hiking through a stream 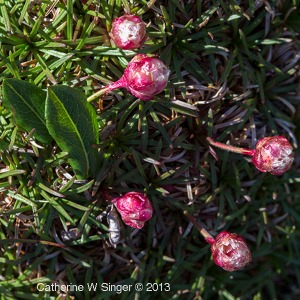 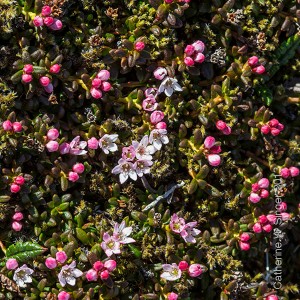 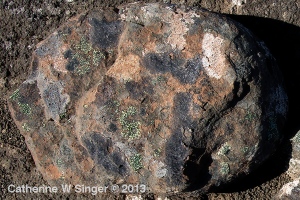 Leaving Djupavik was hard, but here is the road again. 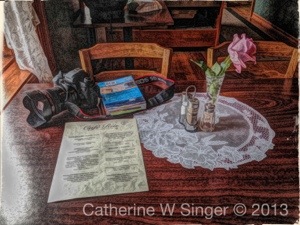 Please forgive me with these postings. I brought my iPad and a couple of external hard drives, hoping to bypass lugging a laptop. Unfortunately, the iPad and the hard drives are not playing well and after updating the WordPress app, at least that is working fairly well. With my difficulty to uploading images from my camera to the iPad, I’m learning its best to just photograph for WP with the iPhone.

I am deciding whether to stay at the Hotel Djupavik another night or not. Eva and her husband have made it so cozy and welcoming and the surroundings are so lovely, its hard to leave.

After my boat ride yesterday, I had dinner atKaffi Norðurfjörður. The owner had a large collection of record albums. The food was delicious. Simple gourmet. 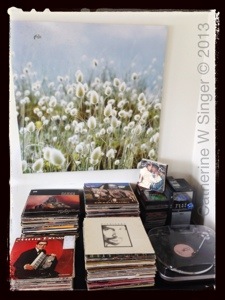 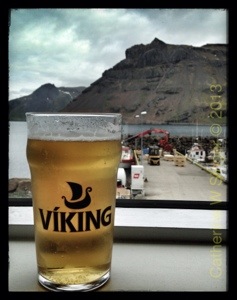 Today is Iceland’s National Day, in “(Icelandic: Þjóðhátíðardagurinn, the day of the nation’s celebration), 17 June, is a holiday in Iceland and celebrates the day in 1944 that The Republic of Iceland (Lýðveldið Ísland) was formed. The date of 17 June was chosen because it is the birthday of Jón Sigurðsson, a major figure of Icelandic culture and the leader of the 19th century Icelandic independence movement.”http://en.wikipedia.org/wiki/Icelandic_National_Day

The lovely owner of Hotel Djupavik, Eva booked me a ferry ride from Norðurfjörður to Latravik on the Hornstrandir peninsula. It has the largest Arctic Fox population in Iceland. About 300. They were almost hunted to extinction but now are protected and quite friendly.
The boat was dropping a group of campers for a few days and picking up another group. There is a lighthouse there. Four young women and I were on for the ride. One was very informative about the area. Her great grandmother was the last to leave a remote part of that area. Her husband shot himself in the foot and died, leaving her alone with nine very young children. She had to move them all to the farm that was less remote. The young woman I spoke to went there recently as part of a family reunion. They flew in and walked to the site of the home and had a picnic. The weather had taken away most of it but some of the foundation rocks remained. 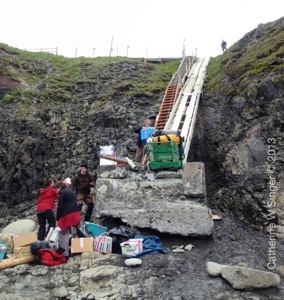 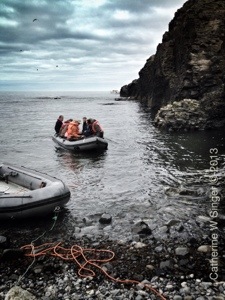 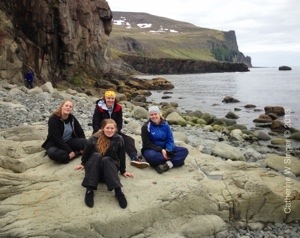 After my 5:30a wakeup I motored mostly 9 hours straight to Djupavik in the eastern part of the West Fjords. The Universe sent another hitchhiker to keep me awake. Especially since nothing was open for breakfast even in Isafjordur of all places! The largest settlement in the West Fjords and a breakfast cafe isn’t open until 11a! It would be 28 hours from my breakfast before yesterday’s adventure until I ate another meal.

My hitchhiker was from France, but really “all over” he said. He recently started working at the Arctic Fox Center outside of the city. He was full of fox information. They have been protected for 40 years, were almost extinct, and I think he said there were 400 here now. They are not afraid of people since they haven’t been hunted since their protection status.

For lack of iPhone photos, I’m adding a journey to a nearby town for lunch and petrol, that Sandra at the hostel recommended. I’m sorry I’m a couple of weeks early for her photo exhibit in Bildudalur. 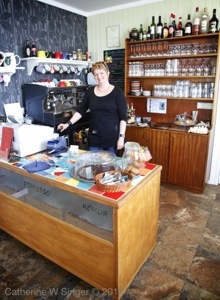 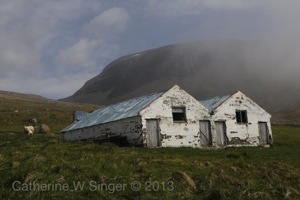 I realize I’m behind a few days but having endless amounts of sunlight has thrown me off.

When I left my tiny fishing village I planned on arriving at my destination, a day later. Stopping to take pictures adds hours to minutes so I expected to stop somewhere for the night on the way. About 3:30p I saw a small sign on the road for coffee. It’s here where someone suggested visiting an amazing area only accessible by 4-wheel drive. He said he did it in 2 1/2 hours without stopping.

It turned into 11 for me and was astoundingly beautiful! While accessing the passibility of my second mountain stream, I met a Russian couple that had just turned back. They only had 2-wheel drive and didn’t want to chance the next crossings. They were anxious to see a lighthouse on the way and decided to attack the road from the other side. Just as I was considering giving up, I saw on the map that on the road was “the scariest mountain valley in Iceland.” Now, I had to go. Besides, the man I talked to assured me my vehicle could navigate the journey. That became my mantra with each new crossing.

Not only did I found a valley but a more scary building. It was like a dream! I came here to photograph the kelp and I found a dreamy cove full of it. I hoped to see an Arctic Fox and I saw and heard a very loud one here.

After about 2 AM I decided to sleep in my car. Though the sun never seemed to set, it appeared to rise again about 12 AM. According to the map, I’d only driven 2/3 of my route. Sleeping in my clothes, boots, two jackets, two blankets, a cap and headband didn’t keep me as warm as I’d liked but it was good. My stopping point was surreal; a grassy spot high up top an ocean cliff with tall rock formations down below. I could hear the waves coming in As I tried sleeping, something thumped my vehicle. Maybe a troll? Just a ram. It “baaaahhd” how much it wanted me off his turf. The wildlife here is very expressive. 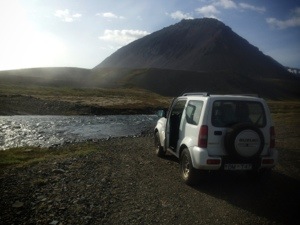 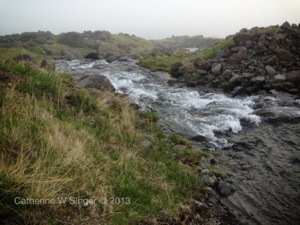 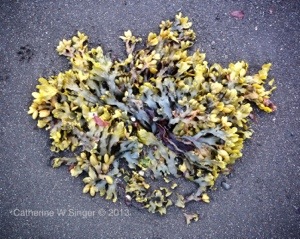 I have been staying at the Bildudalur hostel. A bit pricey for a hostel but it is in a remote area closest to Arnarfjörður. Its considered by some to be the most beautiful fjord of the West Fjords. I believe my friend Fridgeir recommended it. The road in to Bildudalur is stunning, steep, long, windy; and a dirt, rock, washboard and pothole challenge (as much of the Western Fjords roads are.) It is a simple fishing town surrounded by stunning mountains. 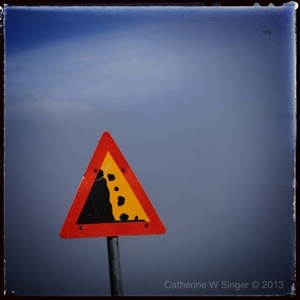 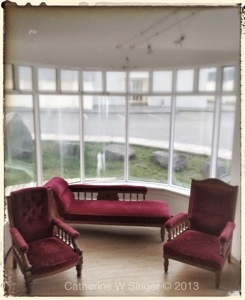 Today I visited Samuel Jonsson’s home, church and statues that he built by hand. Called “the simple-hearted artist,” after retiring and collecting his pension, he built these buildings and made paintings. He built an alter for the local church but they turned it down. Undaunted, he built his own little church for his altarpiece. 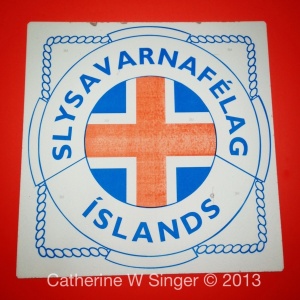 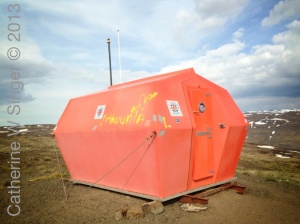 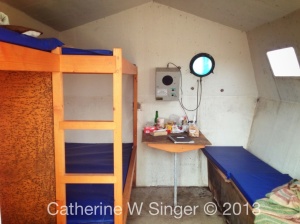 <a I finally stepped on to the land of aliens, sea monsters and Vikings!  The gods and Anton at Avis blessed me with a free  upgrade to my trusty steed; a Suzuki Jimmy.

After 10 hours of flying from LAX to Seattle to Reykjavik, my 5 hour drive to my hostel in the West Fjords turned into a 12 hour adventure.  Shortly after embarking, I picked up two young women from Burgundy, France who were hitchhiking with their bedrolls and backpacks.  Miraculously, we were all going to about the same destination!

We couldn't help but break up the trip with picturetaking, cigarettes (not me, of course), coffee and the occasional pit stop.

Its hard to describe the feeling deep inside me while I look at the vast fields of lava and rock, appearing to have just cooled from the wild ways within this planet.  Moss, flowers and colorful settlements loosen its intense grip and leave me with a feeling of amazement.

A flame of excitement ignited within me this afternoon when a woman I contacted through www.airbnb.com accepted my request to stay at her and her 10-year-old daughter’s apartment while I’m in Reykjavik.  I’ll be attending my friend Fridgeir’s wedding during the end of my adventure.  While she didn’t know him personally, she messaged that she and Fridgeir share a friend.  An estimated 60% of Iceland’s population lives in the capital and most grew up together, so I knew to mention Fridgeir’s name in my airbnb introduction to the woman.

Now I have my flight, car rental reservation and a place to stay at the end of my trip.